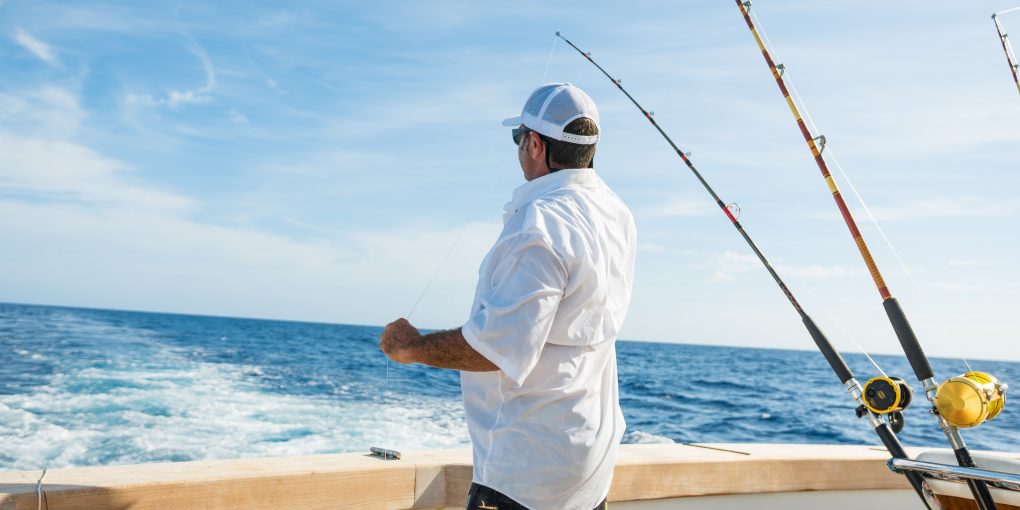 This article may contain affiliate links. If you make a purchase after clicking on a link we may earn a small commission at no extra cost to you.

​Shark's are one of the ultimate game fish you can target whether that's from the beach or off-shore on a boat.

​When choosing the best shark fishing reels you first need to decide just what size shark you will actually be targeting.

A sub six feet shark from the shore will have a very different rod and reel requirement than a 600 pound Mako from a boat.

You then need to decide where exactly you will be fishing. Will it be from the shore or offshore on a boat?

The type of shark rod that you use for either location are usually very different.

As with most saltwater fishing you have the choice between either a spinning reel or a conventional reel.

Spinning reels are best when casting on a beach whereas a conventional reel is preferred when you need to put down big leverage against a massive shark out on the ocean.

Firstly take a look at your shark fishing setup then match your reel to the line and the type of rod that is usually used in the scenario.

If you choose to use a spinning reel for shark then you should aim to use a high quality reel that is capable of holding line that is rated at least 50 pounds in weight.

High quality really is the only option here as even a small shark will make light work or some cheap spinning reel.

Stick to the major brands and large sizes. Depending on your line requirements you will want to run anywhere from a size 6000 reel all the way up to a 10000.

​A good compromise for smaller sharks from the beach on a spinning setup would be a size 8000.

An 8000 is still light enough so that it does not unbalance the rod.

Penn, Shimano, Daiwa and Fin Nor are the most established brands for larger sized spinning reels for shark fishing.

Working big baits from a boat needs a reel that can hold a heck of a lot of heavy line.

This is where a large spool conventional level wind reel for sharks is the only real choice.

Make no mistake about large sharks can stay nose down for well over two hours and your reel is going to be taking a serious hammering.

​Not only is there a constant strain on the drag, but the regular runs that massive sharks can make will destroy any reel that is not up to the task.

Penn are easily the leader in offshore reels and classic reels like the Penn Senator or International have proven themselves time and time again.

Cheap low quality reels are an absolute waste of time and chances are if you do hook the fish of a lifetime then it will probably snap your line if your reel ends up seizing.

​The Daiwa Saltist is probably the best value shark spinning reel available. It is just as smooth and capable of a reel several hundred dollars more expensive.

Daiwa have put considerable focus on ensuring that the Saltist is a resistant to the corrosive effects of salt water as possible. Salt water will destroy a reel once it gets inside the housing and bearings, always rinse your reels in fresh water as soon as possible after use.

The Saltist is pretty much an all metal construction with the exception of the waterproof Carbon ATD Drag. No fancy or exotic materials just sound engineering and very tight tolerances.

​8 main bearings and one anti-reverse bearing are made from a special form of corrosion resistant stainless steel.

Every seen the big game fish fighting chair scene in the movie Jaws?

​The all time classic conventional shark fishing reel the Penn Senator is probably responsible for the landing of more sharks than any other reel.

They are an absolute work horse and if looked after and serviced regularly should last you decades of dependable service.

​The Senator is no high speed reel and is built for ​hauling large fish from the deep. With a gear ratio of between 2.0:1 and 4.0:1 depending on the model you can put some serious power down when using one of these old school cranking machines.

Although the Senator has been around since the 1930's the technology and design has been continuously updated by Penn to keep the reel competitive.

​The third in the line of the hugely successful Slammer range of saltwater spinning reels from Penn, the Slammer III is built with one thing in mind; corrosion proofing.

Penn have gone to great length in both construction, design and materials when choosing the type of components to add to the Slammer.

These reels are built for both heavy surf casting work and larger heavy spinning setups for larger species on offshore charter boats.

​Available from a size 3500 up to a massive 10500 these reels have big spools for holding a lot of line and an incredibly robust drag system.

The biggest in the series the size 10500 has a massive 60 lbs of maximum drag force which incredibly large for an open face reel.

If you are looking for a hardcore spinning reel for shark fishing then the Pen Slammer III is it.

​The SW in the Saragosa name denotes that it is one of Shimano's offshore spinning reel offerings.

These reels are big, so big they only start at a size 5000 which would be a medium size fishing reel for most manufacturers/models to top it all off the biggest in the range is a size 25000.

In terms of price it is aimed at the lower end of the market when compared to say a Twin Power SW or the Stella SW but it does include a lot of their features and build components.

The Saragosa gets ​some of the high end bells and whistles that Shimano have incorporated into their best reels in recent years.

The body on the Saragosa is made with their cold forged aluminum construction process called Hagene which gives the body an exceptionally rigid structure into which the Hagane gears are housed. All this adds up to very little flex or warp when the reels are put under heavy load.

​One the smaller sizes there are 5 shielded stainless steel ball bearings and on the size 20,000 and 25,000 there is an additional bearing.

​Finished in a rather striking gold hue the Maikara is Okuma top of the line offshore big-game conventional reel. It is up there with the best of them and is pretty similar in build quality and power as it's other golden competitor the Penn International VS.

Penn used to absolutely dominate the shark reel segment of the market but with the Maikaira, Okuma have taken a serious swipe at strangle hold and offer up a serious contender.

The frame is built from one piece machined aluminum with forged side plates that has finished with a special anti-corrosive coating.

You get an angled big T-bar handle for cranking down hard against big sharks. All that power is transmitted through helical cut gears which can carry a lot more torque than regular straight cut.

The carbonite drag is built to withstand the immense pressures of big ​shark fishing and on the larger models has a strike drag of 70 lbs and a whopping 100 lbs of drag at full on the lever drag models.

A good shark reel needs to be able to hold a lot of high breaking strain line and also have a serious drag system coupled with a very high quality set of internal gears.

More modern reels will use helical cut gears which mean a better mesh between each gear and a much smoother operation especially when under a lot of pressure.

Internal gears need to be well sealed in order to protect them from salt water.

If you are targeting smaller sharks a spinning reel is a perfectly suitable choice.

​Spinning reels are a perfect choice when beach fishing for sharks as they can cast lighter baits and shark rigs than a conventional reel will.

Once you start to target larger fish especially offshore then a conventional reel makes the most sense.

There are different types of conventional reels available, single speed, two speed and variations of both with either a star drag or a lever drag system.

A two speed reel can be a real bonus. Just flick the lever and you get a load more torque to help fight against these mighty predators.

Torque or pulling power is what helps haul a large fish up from the depths.

You will of course loose a small bit of speed with the lower gearing.

You'll need a large capacity reel that can hold at an absolute minimum 300 yards of 50 lb line.

Always wash your reels in freshwater after every use to help reduce the chances of salt water corrosion.

If you are to invest in a high quality reel then you really need to take the time to look after it and do some regular maintenance.

Always have your reels serviced regularly if they are being used heavily. A good reel can last decades if properly maintained.