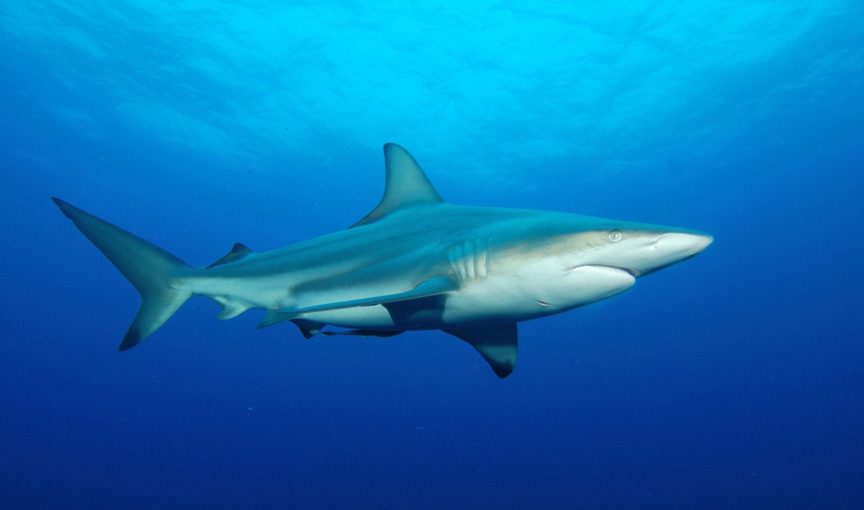 This article may contain affiliate links. If you make a purchase after clicking on a link we may earn a small commission at no extra cost to you.

In fact a lot of the times it is by accident when they are surf fishing with some kind of bait rig intended for ​other species.

One thing is for certain fighting these smaller sharks can be a heck of a lot of fun on light tackle.

Most Blacktip sharks will grow to a maximum of just over six feet in length and roughly 40 lbs in weight. But for their size they can be offer a great fight with plenty of aerial displays once hooked.

On heavy tackle when targeting much larger species of shark however they can become a bit of a nuisance as they will happily make bits of a larger shark fishing bait,  sometimes attacking it in small groups.

​Blacktip shark fishing can be done with both bait and lures on light spinning or conventional tackle and even flyfishing for Blacktip is growing rapidly in popularity.

The majority are caught near the surface even when offshore. So sight fishing is normally the best way to go, a good pair of polarized fishing sunglasses will help reduce glare and allow you to see several feet down with more clarity.

Catching Blacktip shark on bait will always be the most productive especially when using a chum bag.

Spread four rods out around a natural structure like a small reef or grass flats where they are known to be found and you should at least see a few interested.

If they refuse your bait for whatever reason then switch to casting topwater plugs as sometimes it can take a little action to get them to bite down.

There is no need for for super heavy offshore conventional gear unless that is where you are fishing and there is the possibility that larger sharks may also take your bait.

The ​best reel for shark fishing on lighter gear will be a size​ 8000 spinning reel. Not only can you fish with the normal shark bait rigs but you can also cast smaller lures like top water plugs with ease.

A good shark fishing pole when using a size ​8000 spinning reel would be a 7 or 8 foot salt water spinning rod like an Ugly Stik Tiger Elite or a surf casting rod in the 9 feet range if you need to cast a larger setup out beyond the breaking surf.

When choosing the right line for smaller sharks such as Blacktip then 50 braid or even 30 to 40 pound monofilament is a good choice for mainline.

If larger sharks are also in the same waters then I would run 65 lbs braid or 100 lb mono at a minimum.

A shock leader can be used that is 150 lb monofilament, and even for small sharks I'll use a single strand wire leader of up to 150 lb attached to a size 7/0 or 9/0 circle hook.

​Blacktips tend to inhabit reefs and sandy bars in and around beaches so pretty much any bait that makes these areas their home is what will catch Blacktips the easiest.

When fishing for Blacktips like any other shark species chumming will generally give the best results.

Sharks have a much better sense of smell than they do eyesight so get that chum in the water early.

Use the smelliest and oiliest fish you can find. A great reliable chum is a mix of mackerel and barracuda if you can get your hands on them. The mackerel are nice and oily and the cuda smell pretty strong.

Even if you are casting lures still try to get a small bit of chum in the water.

Squid can be a real game changer if they are refusing either live or dead fish as bait. You can use squid on some very light rigs which makes for very interesting fishing once a blacktip is hooked.